New Zealand held their nerve to seal a cliffhanger to take lead in the five match series. Scott Styris (49 not out, 34b, 1x6, 7x4) held his nerve during the closing stages of the match as he steered New Zealanders to a two wicket win.

Earlier winning the toss, Ponting elected to bat first and openers Watson (45, 31b, 1x6, 7x4) and Haddin (12, 16b, 2x4) hammered the Kiwi bowlers into submission in the opening overs. Almost all the Australian batsmen got starts with but with an exception of Hussey (59, 59b, 4x4) none of the top-order batsmen crossed the fifty run mark. Australia ended their innings after fifty overs at 275 for 8. For the hosts Tuffey took three wickets while Bond claimed two wickets. 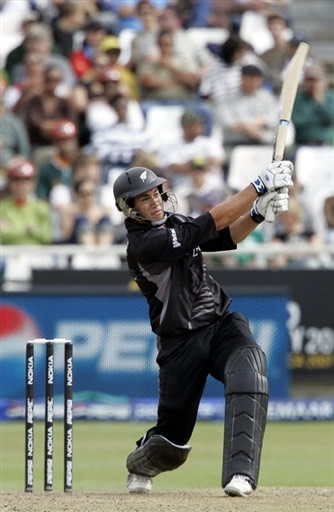 The Kiwi innings was in disarray at 207 for 6 in 41.1 overs before Styris took hold of the faltering chase. The belligerent all-rounder who played only because Vettori opted out due to stiff neck held his nerve as he biffed the Australian bowlers to all parts of the ground. The short but strongly built all-rounder took on the Australian bowlers and it rattled the visitors as it showed with Mitchell Johnson and Styris exchanging heated words in the middle. Though the Kiwis lost Tuffey (12, 11b) and Southee (2, 3b) Styris did not let this affect his concentration in the middle. He found a willing and unusual partner in Bond (11, 8b, 2x4) as the two helped New Zealand overhaul the Australian target in the final over.