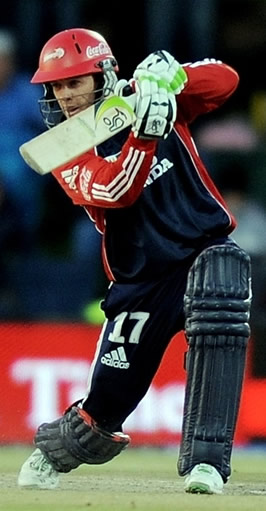 Delhi Daredevils snapped the winning streak of Royal Challengers by scripting a 17-run win at the Chinnaswamy Stadium on Thursday.

The win also ended Delhi’s losing streak and handed the first home defeat to the Challengers. The visitors posted a competitive total of 183 for five and aided by excellent spin bowling by Amit Mishra defended it with relative ease. The Delhi medium pacers Dirk Nannes and Umesh Yadav also played their parts to perfection. Amit Mishra’s big wickets of Kallis and Uthappa clinched the issue in favour of Delhi. Not afraid to toss the ball, the wily Mishra bowled Kallis with a googly when the batsmen stepped out to play his trademark inside out shot and Uthappa paid the price for impetuosity. After successfully reverse sweeping the spinner early, he tried to repeat the stroke and was caught by wicket keeper Karthik off a top-edge.

Manish Pandey (39) and Rahul Dravid (1) left in quick succession and the chase was derailed. Morgan and Uthappa sparked briefly but Delhi’s bowling was potent. Kohli’s cameo wasn’t enough to see his side home. The visitors were also electric on the field and two run-outs was testimony to it. AB de Villiers exemplified the spirit by taking an excellent catch in the deep to signal the end of Praveen Kumar.

Earlier, David Warner stole the limelight from Virender Shewag. The burly left-hander started off as a runaway train scoring 33 off 14 balls as both Steyn and Praveen Kumar were taken to the cleaners. Sanity was restored after his and Shewag’s dismissal Delhi was pegged back by some accurate Bangalore bowling. AB de Villiers played himself into form and scored 45 before he was run-out. It was left to Kedar Jadhav, who started cautiously, to induce urgency into the proceedings. Jadhav grew in confidence and tore into the attack. Jadhav mauled Praveen Kumar and spoiled Steyn’s figures. Jadhav and MacDonald added 49 runs at frantic pace for the fifth wicket as Delhi finished strongly.