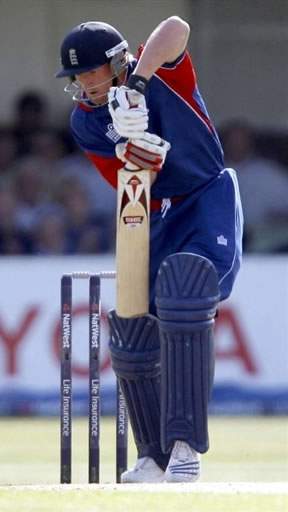 Delhi had luck going their way by winning the toss and had the best of conditions. Collingwood held the innings together with a classy 76 and grabbed the spotlight from other batting superstars in the line-up. Collingwood’s knock which came off 46 balls was the difference between the two sides today. Delhi made 184 for five which considering the state of the pitch was a monster total and Bangalore fell short by 37 runs.

The Englishman looked in superb touch when he struck sixes effortlessly off Kallis and send White to the cleaners by taking 19 runs off his only over. After losing all the glamour boys by the end of the 11th over, Collingwood took over the mantle of scoring runs and mauled Mithun who conceded 19 runs in the penultimate over. The last five overs of the Delhi innings saw them garner nearly 60 runs with Collingwood scoring majority of them. Until Collingwood’s knock, Bangalore had done well to keep Delhi in check by taking regular wickets.Shewag (33 off 22 balls) sparkled for a while and hit the bowlers for five sweet boundaries and two sixes before chopping a delivery from Mithun on to the stumps. Gambhir was run-out cheaply. Warner carried on merrily and struck Appanna for two consecutive sixes before Kumble nailed him. Karthik fell to a blinder and Delhi was in spot of bother. But Collingwood got into his act and shared an unbroken 60-run stand with Vettori (19 not out) to take the game away from Bangalore. Chasing 185, Bangalore needed a good start but the makeshift opening pair of White and Kallis was a disaster. White struggled to find his timings while Kallis played a few forcing shots. Gambhir used Mishra,

Sangwan and Bhatia along with Maharoof in the powerplay. They bowled wicket to wicket and crammed the batsmen for room. White gave Mishra the charge and holed out after facing 11 deliveries. Bangalore was restricted to just 38 runs in the powerplays. The Delhi attack lacked pace but was disciplined. Bhatia with his slow off cutters and Sangwan with his yorker length deliveries commanded respect form the batsmen. Sangwan yorked Pietersen who never really found his touch in this game and Bangalore was in trouble at 52 for two in the 10th over. Uthappa couldn’t repeat his heroics and holed out to Warner in the deep. Ross Taylor playing his first match in the tournament raised visions of a fightback when he hit three sixes off Mishra. But Rajat Bhatia trapped him in front with and the contest ended there. The mounting run-rate was too much for the rest of the batsmen some of whom were batting for the first time in the entire tournament. It was all over bar the shouting with Kallis (54) was caught by Collingwood off Sangwan.