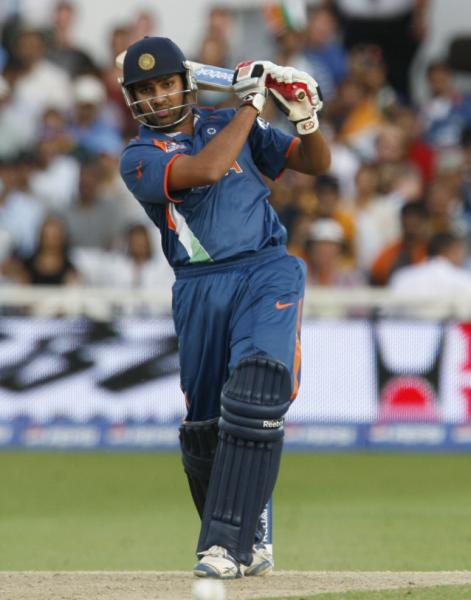 The Indian side rebounded with a spectacular and clinical performance to get better of as much more experienced Sri Lankan side. With this win the Indians got the much needed two points in their kitty while the Lankans will look hard at themselves to see as to where the match went wrong for them. Rohit Sharma scored his second ODI ton in his fledgling career to issue notice to the Indian selectors that he is still one of the hottest property in the Indian cricketing circles.

Sri Lanka in their 50 overs scored 242 in 49.5 overs as they lost all their wickets to some excellent bowling from the Indian bowlers.

Suresh Raina won the toss and this time he elected to field first. The bowlers fresh from the pasting that they received from the hands of Zimbabwe bowled with greater control and verve to keep the Lankan batsmen under check. The seamers, Umesh Yadav and Ashoke Dinda moved the ball in the air and off the pitch with the former generating some serious pace. The Lankans were dealt an early blow when Upul Tharanga became the first to get run out. Tharanga was left stranded when Virat Kohli, who initially fumbled in collecting the ball, threw it accurately at the Lankan's end while he was attempting a third run.

Thilan Samaraweera didn't last long either and was stumped by Dinesh Karthik while trying to charge at a Pragyan Ojha delivery. Dilshan and Mathews put on 58 runs for the third wicket before the Sri Lankan skipper became the second Lankan batsmen to be run out. Mathews held one end together with a gritty knock that included a couple of sixes and an equal number of fours. His prized wicket ultimately went to Umesh Yadav, who bowled him. All-rounder Ravindra Jadeja bagged two late wickets in Chamara Kapugedera and Chamara Silva to make sure that the Lankan innings never took off. Thissara Perera's late 32-run cameo down the order did, however, help the Lankan to go past the 200 mark.

The Indians in reply did not get off to a flying start as Dinesh Karthik and Murali Vijay were content to see off the new ball attack. The pair did not play any particular shot in anger as they put on 28 in 6.4 overs before Murali Vijay was trapped leg-before by Kulasekara. Dinesh Karthik followed his partners foot-steps back into the pavilion as he mishit a googly from Mendis towards midwicket as the Indian innings wobbled at 47 for 2 in 9.4 overs.

That brought together two batsmen who are presently hailed as the future batting mainstays of the Indian cricket. Delhi batsman Virat Kohli and Mumbai batsman Rohit Sharma took their time to settle down as they knew that they had ample time at their hands. They decoded the Lankan bowlers with ease and once they felt comfortable with the bowling and the pitch the duo opened up with some blistering shots. The Lankan bowlers failed to grasp the situation well and they let the match slip away from them with each passing over.

The young batsmen added 154 in 28 overs before Kohli on 82 and within sights of a second ODI ton holed out in the deep. Rohit Sharma on the other hand seemed to have understood the value of a hundred and continued his gallop towards the hundred run mark and he did reach the landmark with a withering cut shot. The formalities of an Indian win was completed with little difficulties.